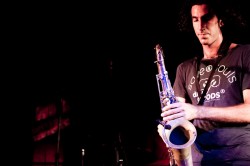 Update Required To play the media you will need to either update your browser to a recent version or update your Flash plugin.

South African Rus Nerwich pursues his passion and life’s work with a deep sincerity and single minded focus. Drawing from a wide range of influences, both musical and theatrical Nerwich takes listeners to place deep inside his imagination. His new band is therefore aptly titled “The Collective Imagination”

Under the Poetree is Nerwich’s fifth album and is a departure from the more traditionally world and jazz influenced records he has previously released.The album explores an electronic and neo-soul space with some quirky suprises in between. It’s not often you hear a 80 year old raping inYiddish!

“I recorded this album at the House of Love and Jazz”, says Nerwich,“A studio I built myself in order to record the project”. Nerwich engineered and produced the album himself and was his first exploration of the electronic medium. Received with excitement “Under the Poetree” was nominated for a South African Music award in the “Best Urban Pop” category and has been performed live with featured performances at The Cape Town International Jazz Festival as well as other prestigious festivals and events around the country.

Nerwich has been recording consistently for the past 7 years, with 5 albums and a long list of national and international collaborations, he is recognized as one of South Africa’s most innovative and prolific artists. HIs album “Beyond the Walls” which explored music from the Ghettos and Camps is one of the most notable works to be produced in recent years. His Mantras4Modern Man project has toured Europe annually since 2008 and had its first performance in Israel in 2011.“I am Constantly working on developing and refining the repetoire and music these projects will grow with me for the rest of my days”, says Nerwich.

The year began with a creative burst. Rus has just finished his first short film titled “One fine day, Love came to visit” and has plans for recording a new album, a childrens book and European Tour in April/ May 2012.